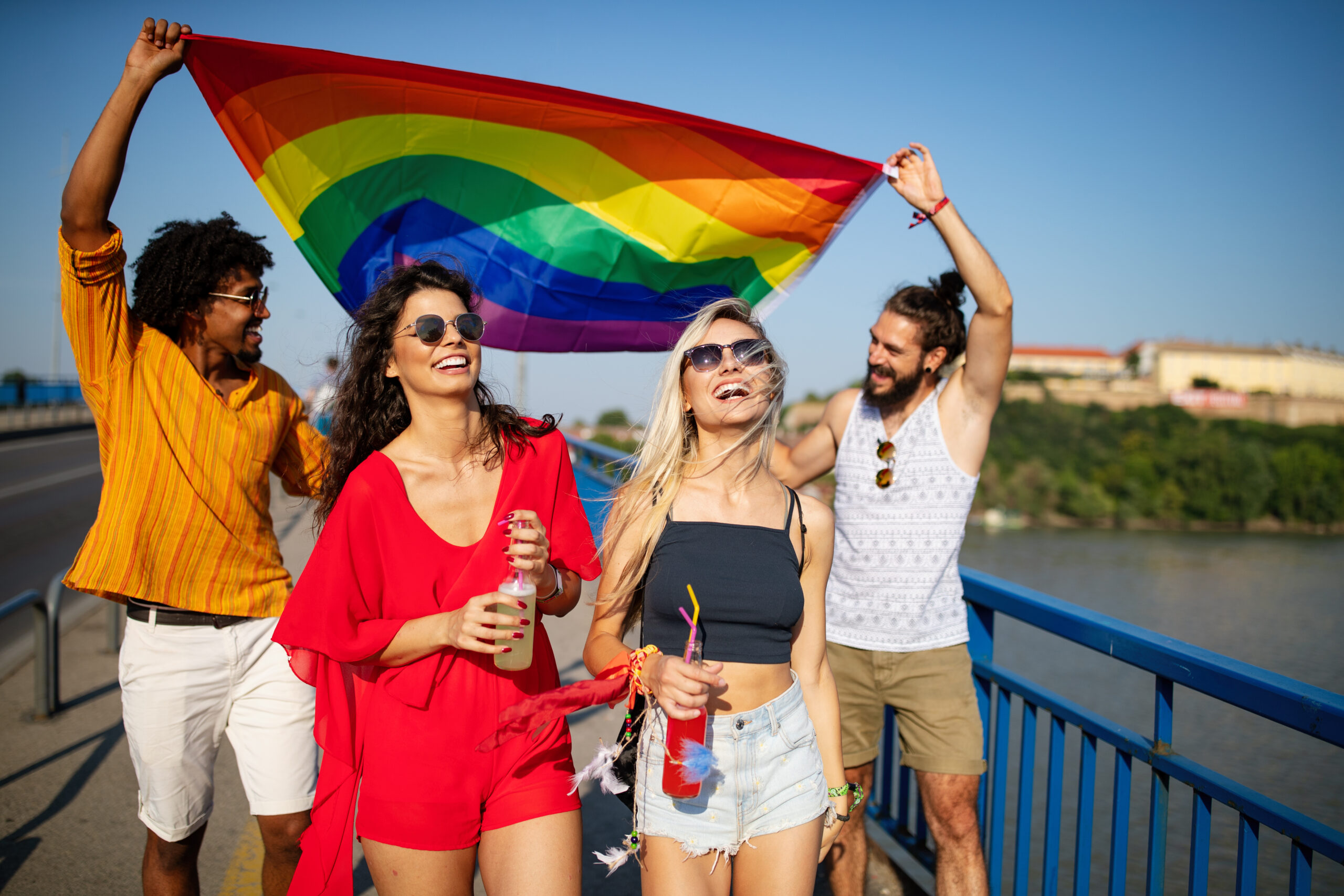 Orlando is a vibrant city that welcomes the LGBT community with warmth and kindness. It offers plenty of attractions, events and gay-friendly places where you can hang out with kindred spirits from all corners of the world. Orlando gay clubs and bars are well-known to be liberal spots where you can mingle all night. Likewise, there are all-day restaurants, cafes, and establishments that are well-known to charm pink money.

Moreover, there are yearly gay days celebrated during summer at some Disney theme parks. While the gay scene in Orlando is not a grand as those in New York and San Francisco, you will nonetheless uncover a fantastic range of things to do and experience for kings and queens.

Orlando also has a prominent art scene and it helps hundreds of performers plying their trade at live entertainment shows around the city and at the theme parks. Thus, there are now drag act shows in several burger joints, shirtless go-go dancers, and many more fun attractions.

With its incredible music scene, fab dining options, an overwhelming array of attractions and great Orlando gay clubs you are bound to find a vibrant and exciting gay scene in the city.

There is no central gay scene in Orlando, but there are lots of gay-friendly establishments scattered throughout the city. Most of the gay related-activities converge during Gay Days Orlando, but the local scene is growing and flourishing for the gay community. Here are the top-rated Gay Bars and Clubs that you should visit.

Parliament House id an institution for the gay community and a center for gay Orlando. This gay bar and hotel is one of the largest and most well-known gay clubs in the area. It houses Footlight Theater, Rainbow Cafe and seven various bars. Likewise, the club is famous for its locally produced musicals and plays. There is a huge dance floor at the center stage with lots of laser lights and effects. Rainbow Cafe offers meals all day. More so, the impressive Parliament House also has a 112-room hotel connected to the entertainment complex.

A College Park Orlando gay-club is well-known for its features that resembles a lodge. They have a backyard deck area including a koi pond. Additionally, the bar exudes a soothing and laid-back ambiance. There is a billiards spot and a novelty shop that sells adult movies and toys. They also feature Thursday Latin nights which is the most well-known night in the bar. Likewise, they do the ‘underwear nights,’ wherein you won’t be allowed entry if you are not in your underwear.

One of the best of Orlando gay bars, this club has been serving the LGBT community already for 35 years. It is one of the oldest gay clubs in the city with several closures and reopening after significant renovations. They are now more spacious, finer and feature an even more vibrant party atmosphere with local DJs and live events. They have various drag shows during weeknights and happy hour goes from four in the afternoon to nine in the evening.

This gay nightclub has two separate bars, the Savoy and the Tattoo Lounge. They offer nightly entertainment with dancers and LED lights. Moreover, the bars have premium liquor offerings along with 30 types of beers. Savor is famous for its crisp and modern decor. They have electronic darts, pool tables, flat-screen television, and a huge outdoor patio. It is also the home of The Men of Savoy, their go-go dancers that perform shirtless daily from six in the evening to two in the morning.

Aside from its long line of gay bars and clubs, Orlando also boasts of a wide selection of gay-friendly restaurants and eateries that you can enjoy during your stay.

A well-known gay-friendly food and nightspot in Orlando, the White Wolf has a colorful bohemian community. It is a bistro that serves meals including locally sourced crab cake eggs benedict. A top-rated event here is the weekend brunch. They feature specially priced mimosas and dishes. It is one of the city’s top gems and remains a universal family-run food joint.

This restaurant serves some of the best Vietnamese food in the country and Orlando is lucky to have them in their midst. Lac-Viet is a fresh addition to the Vietnamese stretch of Colonial Drive. They are known to be friendly with the gay visitors that are exploring this area.

Well-known for their ‘open-air bar for open-minded people,’ everyone will enjoy a fantastic dining experience at Hamburger Mary’s Bar and Grille. They have drag shows and trivia nights. Their menu includes soups, salads and burgers, but they also have an extensive list of cocktails and craft beers. Likewise, they have the nightly drag show ‘Dining with the Divas,’ which includes dancing, singing, and improve performances.

Orlando, being the theme park capital of the world, has more than enough accommodation options for all types of travelers. Most are family-friendly, but there are also well-recognized by the gay community for their diverse and inclusive environment for the members of the LGBT. If you are traveling with a group, a fantastic option is to create your own private luxury getaway with a luxury home rental like Villatel offers. Lots of luxe, space and privacy, plenty of bedrooms, and all of the shared amenities you would expect. Even a fully equipped kitchen to whip up breakfast or your favorite apps.

Orlando is the world’s Theme Park Capital of the World because of having Walt Disney World and Universal Studios Orlando. These two are the focus of most Orlando leisure trips and you can find various guides on how to enjoy the theme park of your choice. For instance, a two-day ticket to Universal Orlando will give you ample time to explore the rides and try out the attractions. More so, Walt Disney World is the biggest in the world, and nothing compares to it. However, there is more to Orlando than theme parks. There are other entertainment options and activities that might interest you.

This fantastic world of make-believe will bring the essence of the extraordinary, magical, and bring out miracles. You can explore this uniquely designed theater at Disney Springs. The show features a world-class set-up to showcase dazzling choreography, an enthralling soundtrack and bold acrobatics.

To help you deal with the hustle of exploring various city attractions, you may opt to get a Go Orlando Card. It allows you to pick from a selection of attractions and schedules available so you can explore at your own pace and enjoy the attached perks and discounts.

This is a popular day tour activity from Orlando. You may try airboat rides at Everglades State Park or sigh at the beautiful cityscapes by taking a Biscayne Bay Cruise. Additionally, some activities allow you to get close to nature and wildlife.

Presently Orlando is rated as one of the gayest cities in the country. Thus, one is up for a massive line up of LGBT entertainment and activities all year through. The most popular amongst gay Orlando events include Disney Gay Days, International Bear Bash, One Magical Weekend, and Come Out With Pride Orlando.

This is a week-long family-friendly event that happens in June of each year. The kings and queens vacation together at a pre-designated Walt Disney Park. It is not yet officially sanctioned by Disney; however, more than 50,000 people have already attended this event.

Come Out With Pride Orlando

Come Out with Pride Orlando is the largest Orlando gay pride event in the whole of Florida. It is held yearly in October to bring together the LGBT community and friends to celebrate diversity and progress. During this event, there is a week-long list of events which ends with a parade and festival at Lake Eola.

There are hundreds of other gay-friendly events that take place annually, so check the schedule as you plan your trip. Much like cultural, historical and special occasions, gay events in Orlando also cause a surge in hotel and restaurant bookings. Thus, make reservations early on if you plan to visit Orlando during these times.