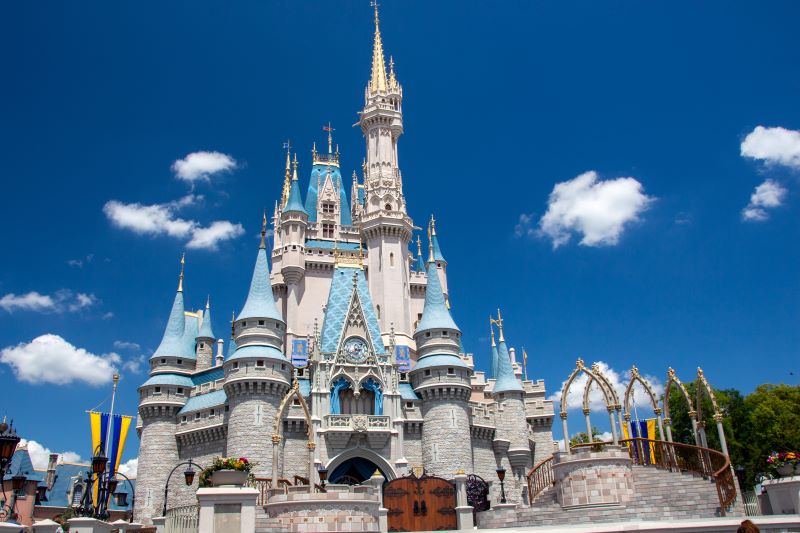 Disneyland vs Disney World: Differences You Should Know

The magical world of Disney is a beloved vacation hotspot, and for good reason: all Disney parks have exciting attractions, family adventures, delicious food, and endless fun. With so many great offerings at every park, you may wonder, “What's better: Disneyland or Disney World?” The good and bad news is: there’s no simple answer! Both parks have dozens of rides, expansive resorts, top-tier shows, theme park entertainment, character sightings, and more.

A trip to any Disney park would be a trip well spent, but there are some differences between Disneyland and Disney World. Each park comes with its own special perks and quirks, so if you’re on the fence about which one to go to, we’ve got you covered.

What started as an idea for a “Mickey Mouse Park” in the 1940s eventually became Walt Disney’s first theme park: Disneyland. Back in July of 1955, there were only 5 main areas, including Main Street, Fantasyland, Adventureland, Frontierland, and Tomorrowland. Since then, California’s Disneyland has continued to grow and has played host to over 700 million visitors.

This park is packed with 60 years of history and nostalgia, perfect for park-goers who first visited as kids and want to revisit old favorites. Disneyland doesn’t just have traditional attractions either. Visitors can also enjoy the latest additions, like Star Wars: Galaxy’s Edge. Generally speaking, people consider Disneyland to be a great destination for shorter vacations with the family.

Disney World came around in 1971, 5 years after Walt Disney’s passing (though he was still involved in the development of this Florida-based park.) Instead of Sleeping Beauty’s castle in Disneyland, Disney World features Cinderella’s castle, which is an iconic symbol of Disney.

The main parks of Disney World are Magic Kingdom, Epcot, Hollywood Studios, and Animal Kingdom. With a lot of available land, there is also plenty of room to expand. This park is often considered the best one for longer vacations, especially for diverse groups. There is plenty to do for families, couples, friends, and even business-convention visitors.

The location alone may be the deciding factor of where you end up vacationing, depending on how much traveling you’re prepared to do. Both parks are located on warm, sunny coasts, but each is on opposite ends of the country.

Disneyland is in Anaheim, California, a city about an hour outside of Los Angeles. If you’re flying in, you’ll likely be coming via the Los Angeles International Airport (LAX), though there is a smaller airport closer to the park called the John Wayne Orange County Airport (SNA).

Disney World is near Orlando, Florida. More specifically, the resort resides in Bay Lake and Lake Buena Vista areas, two cities in the Orlando area. Naturally, it’s easy to get to the park by flying in through the Orlando International Airport (MCO).

Disneyland sits on about 500 acres, which may seem like a lot until you compare it to Disney World’s 43 square miles! That means you could fit about 51 Disneylands in one Disney World Resort! With the extra space, Disney World offers a lot more land to cover and more parks to visit.

For example, Disneyland has two main parks: the original Disneyland Park and the adjoining park, Disney California Adventure. Disney World, on the other hand, has the Magic Kingdom, Epcot, Hollywood Studios, and Animal Kingdom parks, plus two water parks, and five golf courses.

Of course, more doesn’t always mean better. It’s reasonable to hit the main attractions of Disneyland in two or three days, which can be done in a short trip to California. You have to dedicate more time and money to get to everything in Disney World, which just may not be realistic for one trip.

The Magic Kingdom and Disneyland parks are really similar, so with either park, you’ll get a good dose of classic Disney fun. The other parks, however, have more unique vibes; California Adventure has an atmosphere built for fandoms, especially with its popular Avengers Campus and Pixar Pier. Disney World’s other parks have completely unique elements, too—like Epcot’s World Showcase, which features exhibits about 11 different countries.

Each park offers something new and entertaining, so it all depends on how much time you have and which attractions you want to prioritize.

What’s an amusement park without rides? Both Disneyland and Disney World have some well-known rides, such as Splash Mountain, Pirates of the Caribbean, Haunted Mansion, Jungle Cruise, and It’s A Small World. They also have some different rides you won’t find at the other park.

Disneyland has some renowned favorites, like Matterhorn Bobsleds. Other rides specific to Disneyland that you won’t find in Disney World are:

On the other hand, Disney World has some rides you won’t find at any other park, including:

Disney World has 52 rides while Disneyland has about 29, so if you’re big into coasters and other high adrenaline activities, Florida may be the better option. That said, there are still plenty of rides and other attractions at Disneyland that will keep you busy.

When it comes to tickets, both Disneyland resorts use dynamic pricing, which means that ticket prices depend on different factors like the time of year, the day of the week, the age of the guest, etc. Tickets usually go up in price during the holidays, but there are also cheaper tickets during less popular months, like August.

You should expect to pay over $100 for one-day tickets at Disney, and often, the more consecutive days you go, the less the tickets will cost. From there, the price point will largely vary, especially if you get the more expensive Park Hopper passes that let you move freely between parks.

Disneyland provides a free shuttle from the parking lot, meaning you can move freely between the resort to the big, distant parking garage without paying extra. This park also has the well-known Monorail, a train that travels between Tomorrowland in Disneyland Park and Downtown Disney. Because Disneyland is a much smaller resort, inner-park transportation isn’t as concerning. It only takes a few minutes to move from Disneyland to California Adventures.

The 43 miles in Disney World, however, are another story. You want to optimize your travel time as much as possible so you don’t get stuck walking all day instead of enjoying the attractions. That’s why Disney World offers several kinds of on-site transportation including the Monorail, the Skyliner, walking paths, ferries, and boats. You should plan on 10-30 minutes of travel time when using these complementary transports between parks.

In terms of comfort, Disneyland has the most consistent temperatures compared to Florida, so while winter months can get closer to 50 degrees and over 100 in late summer/early fall, Disneyland usually has more moderate temperatures.

Florida can be brutally hot during the summer, which can be a big hindrance for people who don’t want to stand in line in that type of weather. Both parks are more enjoyable in the spring months when it comes to weather and temperature.

As we talked about in the cost section, there are certain times when both Disney resorts are busier and more expensive than others—weekends, for example, are both more expensive and more crowded. Lines are usually 10-20 minutes longer during peak seasons. The best Disney tips out there say that the best low-traffic times are January and September and to avoid holidays if you want to avoid crowds.

That said, some of the holiday attractions are especially fun and offer an even more unique experience, so you may want to consider the extra expenses of holiday visits versus more typical, but less expensive Disney trips.

If you really want to avoid a crowd, beware of holiday weekends like Martin Luther King Jr. weekend, Memorial Day, or Labor Day, which are major peak traveling times. It’s also best to avoid school spring break times, which are usually in March and April.

When you need a break from the rides and adventures, both Disney resorts offer comfortable hotel options with on-site food.

At Disneyland, there are 3 on-site hotels: Disneyland Hotel, Disney's Grand Californian Hotel and Spa, and Disney's Paradise Pier Hotel. Disneyland is also known for its delicious food, especially its renowned churros! You can find a quick burger or pizza around the park, or enjoy sit-down dining in places like the Blue Bayou Restaurant.

Since it’s a much bigger park, Disney World has over 25 on-site hotels to choose from! Disney's Art of Animation Resort is a great option for a tighter budget, or there are more luxury options such as the Animal Kingdom Lodge or Disney's Polynesian Villas & Bungalows. There are also endless food options on-site right near your hotel in every park, and some of the most popular options include BOMA, Prime Time Cafe, California Grill, Cinderella’s Royal Table, and the Be Our Guest Restaurant.

If you don’t want to be on-site but still want a deluxe experience, Villatel offers some of the most exciting vacation resorts in the Orlando area.