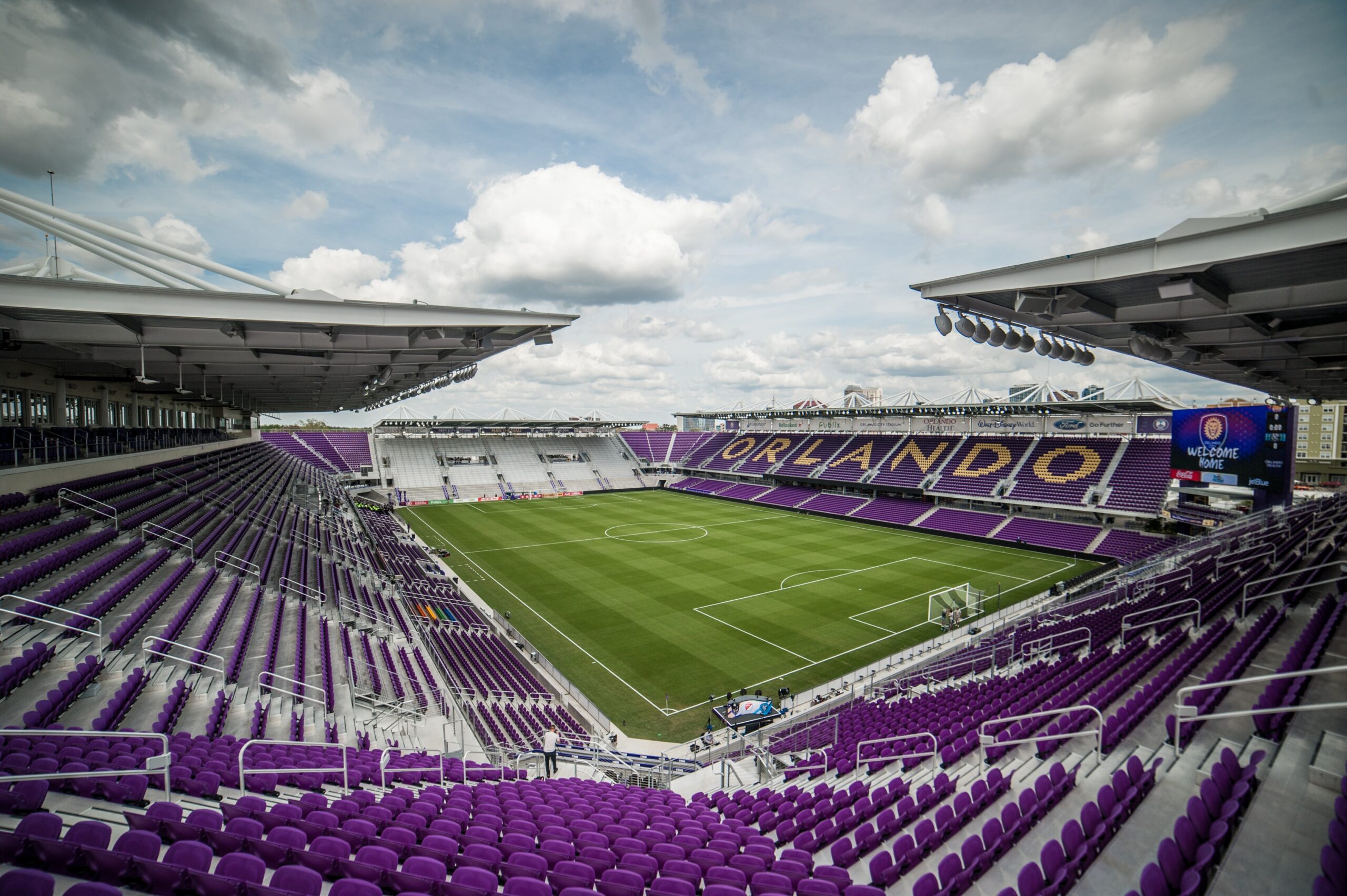 Game on! Travelling or vacationing to Orlando brings up images of famous theme parks in the area. There’s Walt Disney World, Universal Studios and Seaworld. For families and kids, Orlando is one of the happiest places in the world.

However, for sports enthusiasts, Orlando is also a fantastic place for exciting sporting events! When it comes to our sports fans, sporting events orlando is big news! That’s right. Orlando is home to an NBA team, an MLS Soccer team, US Tennis Associations National Campus and many sporting events. Packing for Florida doesn’t need to mean leaving sports behind. Read on, to plan your sports fix in Orlando.

What professional sports teams are in Orlando?

Orlando, Florida is home to several professional sporting teams. Whether it is basketball, soccer, hockey or tennis, there’s bound to be an event happening in the area.
Here are some of our local sports teams. (Check the schedule, maybe your team is in town.)

This National Basketball Association (NBA) team is a member of the Eastern Conference Southeast Division league. The team started in 1989 and has hatched notable basketball stars like Grant Hill, Penny Hardaway, Shaquille O’Neal, Dwight Howard, Patrick Ewing, Steve Francis and Vince Carter. At present, the Orlando Magic has played in for 15 playoffs out of 30 years and in two NBA Finals in 1995 and 2009. The Orlando Magic is considered as one of the most successful expansion teams to join the league from 1988 to 1989. The team plays in their home arena, the Amway Arena from April to October.

Another professional team based in Orlando is the 20th team of the Major League Soccer, the Orlando City Soccer Club. They have a lineup of talented players who played for South American and European leagues including Ricardo Kaka. The Orlando City SC now plays at the Orlando City Stadium.

The Orlando Pride, is the first professional soccer team that is based in Orlando. They are the 10th member of the National Women’s Soccer League (NSWL), and the team is composed of talented international players. Their lineup includes Kaylyn Kyle and Alex Morgan. The team plays at the Orlando City Stadium.

Orlando may give us a lot of sunny weather and summer feel. But the place is also home to the Solar Bears Hockey team, a professional ice hockey team that is housed and trains at the Amway Center. The team was established in 2012 and played in the Eastern Conference Hockey League as an expansion team franchise of the Toronto Maple Leafs and Toronto Marlies.

What are the top sporting events in Orlando?

Originally called the Tangerine Bowl, this collegiate bowl game is one of the oldest in the country having started in the year 1947. It is scheduled on January 1 of each year and considered the “new College Football Playoff” in today’s era of postseason college football. Citrus Bowl continues to host the SEC teams and top Big Ten from the CFP outside series of bowls. Orlando hosts many national bowls and events. Here are some top events.

This is more than just a sporting event, it is a fantastic experience, especially for college friends, families and fans. This event that happens in November brings everyone together for Showdown of the FAMU Rattlers against B-CU Wildcats for bragging rights! This event started in 1978, and at present, there are already 1.8M fans who have attended.

This event was formerly Blockbuster Bowl. For the first year, it attracted more than 74,000 fans with a matchup between Florida State and Penn State. In 2001, it was moved from Miami to Orlando and continued to be successful. This event happens December of each year, so you might want to check out the schedule during your Christmas visit.

Aside from these sporting events, Orlando is also a favourite venue by other sponsored events and other regular-season soccer, basketball and hockey games.

Orlando is home to all American baseball spring training. You can see teams start their training in March in various arenas and stadiums in the area. Teams that flock to Florida for baseball training includes the NY Yankees, Atlanta Braves, Detroit Tigers, Houston Astros and Philadelphia Phillies. Likewise, the Tampa Bay Rays are easily accessible in nearby Tampa once the regular season starts in April to October.

Orlando has become a popular theme park destination for families from all over the world. However, there is more to Disney or Universal in this central Florida city. They also have some of the best sporting venues in the country, and they do not lack exciting major sporting events. Here are two of the top spots in the city:

This is probably the most iconic sporting venue in Orlando. It is the home arena of the Orlando Magic Basketball team and the Orlando Solar Bears Hockey team. This stadium hosted numerous basketball and ice hockey games. A lot of sports celebrities has also graced this the Amway Center during All-Star gaming events. Regularly, rounds of collegiate basketball tournaments are also held here. Apart from sports events, concerts and other performances are also held in this world-class, indoor sports complex.

The Exploria Stadium is located in the vibrant area of Orlando’s entertainment district. This stadium is the home arena of the Orlando City SC and provides supporters with a safe-standing area and terrace for a great view of the pitch. There is also an open area for pre and post-game activities as well as a public art program. The stadium provides premium seating, club seating, suites and all-inclusive club and party suites for groups. Presently, the Exploria Stadium is heralded as one of the best soccer stadiums in the country.

What other sports take place?

Orlando also has annual exciting sports events planned out. For next year, the following activities are much anticipated by locals and tourists alike.

One of the most anticipated international sporting events in O-town is the Orlando International Dragon Boat Festival. Fans, family and friends can watch or take part in this ultimate outdoor game. Paddlers from more than 70 teams are showcased in this significant dragon boat event in Florida. The Asia Trend Cultural Expo also accompanies this sporting event; thus, the festival ground is usually abuzz with entertainment and vendors. Over the years this event is held at the Walt Disney World. You can check out the schedule so you can time your visit to the theme park during this festival.

SeaWorld is set to inaugurate the first SeaWorld Rescue Run this coming January 25, 2020. With this event, you can spend time with family and friends as you stroll, jog and run along the park’s relaxing pathways. You will also get a glimpse of the animals before you reach the finish line located at the Shamu Stadium. The event is sure to be a hit for the entire family as SeaWorld prepares fun-packed features for everyone. This event will benefit the SeaWorld and Busch Gardens Conservation Fund.

Running Universal is set to happen at Universal Studios Orlando on February 1-2, 2020. There will be an Epic Character Race at 5K and 10K. It is going to be a big hit with families and kids as they can run along with their favourite characters at the heart of the resort. More so, there will be unique photo-ops, medals and more.

Monster Jam gives a thrilling performance to the delight of the fans. The event will be back at the Camping World Stadium for the Monster Jam World Finals XXI on May 2-3, 2020. You can expect an elite number of competitors who will showcase their skills and talents in the Monster Jam stage. The finalist will vie for the most desired title of the Monster Jam: World Finals Champion.

Where can I find sports schedules and tickets?

Searching for tickets and sports event schedules in Orlando is easy and hassle-free. The city is focused on providing tourists and guests with superb vacation, entertainment and sports experience while they are in Orlando. You can start planning your vacation before your scheduled trip. Check out team sites or the venues for their training schedules and regular gaming season.

For annual events like the Universal Run and International Dragon Boat Festival, you can check out the theme park schedule. You will be in luck if your visit falls on the scheduled events. You may even join in and experience it with your family. There is no shortage of Orlando Sporting Events.

Likewise, you can also check out Ticketmaster or The Visit Orlando Site for more information on various sporting event schedules, ticket sales and prices for the upcoming activities in the city.