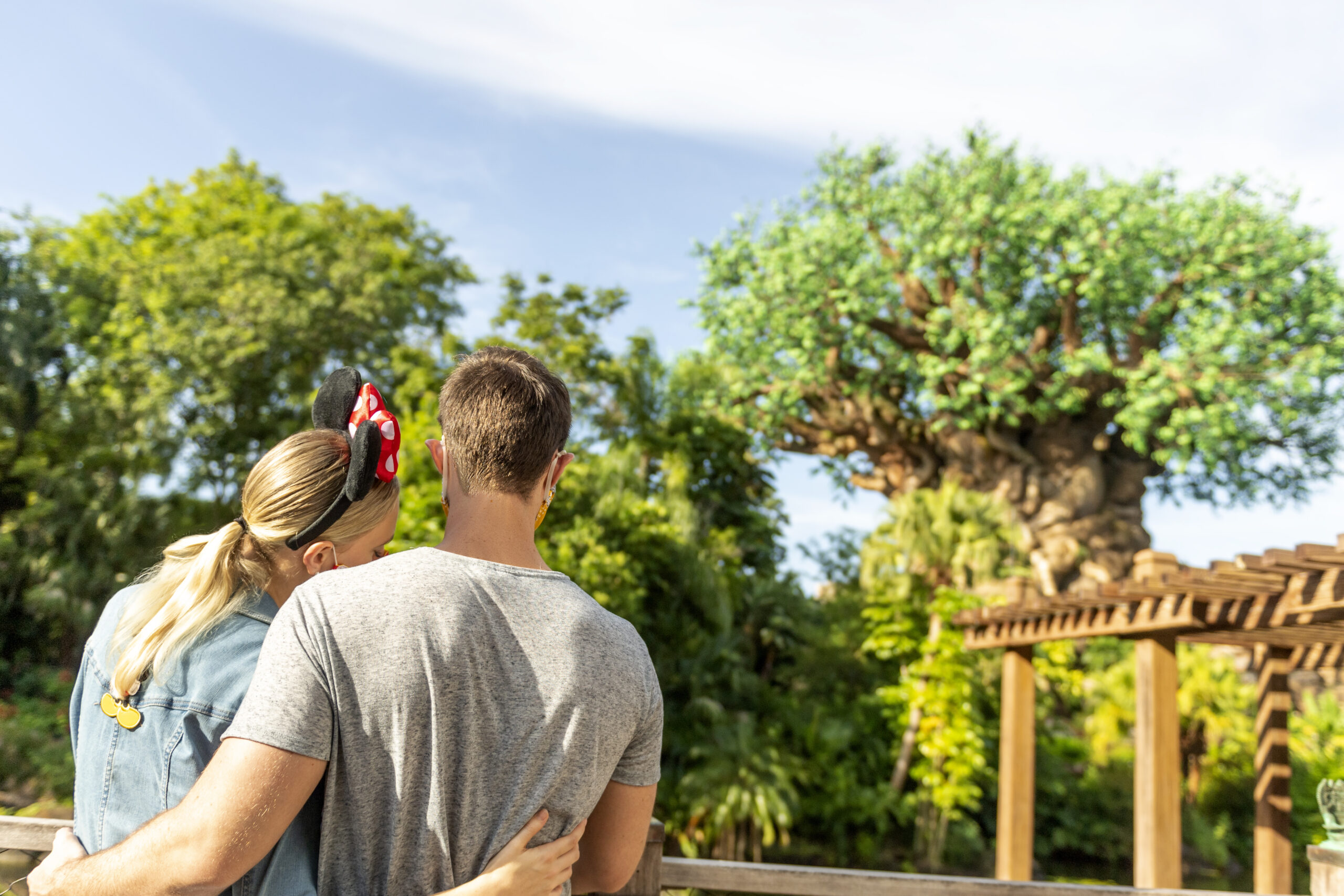 Fun Things for Couples to do in Orlando!

We all think “family and kids” when we think about Orlando, but this vibrant and exciting destination offers a plethora of fantastic activities for couples and adult groups. The adrenaline junkies will still want to hit the parks for thrills and chills, and if you’re on the milder side there are plenty of outdoor activities, museums, less active rides and attractions, and of course, everyone will enjoy the dining both inside and out of the park. The opportunities for fun things to do in Orlando Florida for couples are endless!

Nothing sparks romance like a good rush of adrenaline. And the parks still top fun things for couples to do in Orlando. If you want to experience a massive thrill, try the Kraken at SeaWorld Orlando. This floorless roller coaster practically flies at 65 mph and rises 15-stories high!

The Tower of Terror at Disney’s Hollywood Studios takes you to the Twilight Zone! Even if you’re not old enough to remember the popular TV series, the eerie atmosphere and believable recreation of the haunted elevator at the Hollywood Tower Hotel will give you chills.

Harry Potter and the Escape from Gringotts at Universal Studios is a crowd pleaser. Enter the world of goblins and gold and relive the famous movie scene where Harry, Hermione, Ron, and Griphook break into the Lestrange vault to take the Hufflepuff Cup. This is a motion simulation ride teeming with 3D effects and tricks.

Take in the Scenery, Sights, and Sounds

Universal CityWalk is a romantic destination just waiting to be discovered. Entrance is free and parking becomes free after 6 pm. It is filled with exciting food, entertainment and activities that you can happily share with your significant other. Don't forget to take advantage of the free water taxi ride that loop between the hotels at Universal.

Disney’s BoardWalk is also a surprisingly romantic spot. Go on special dates at the Flying Fish Cafe, which is said to be a personal favorite of Disney’s top man, Bob Iger. The restaurant is known for mouth-watering seafood and steaks. It’s important to note that this establishment has a dress code. While it doesn’t require formal wear, they don’t allow guests in tank tops, swimsuits and swimsuit cover-ups.

Another lovely dining place is Trattoria al Forno. This Italian restaurant is family-friendly but also has private tables tucked away for couples. For cocktails and a lively bar scene, visit AbracadaBar and Jellyrolls. The latter boasts exceptional jazz music.

Universal's Volcano Bay Water Theme Park also deserves special mention. This is a romantic tropical paradise “at the edge of the world.” The park itself was built upon the romantic story of Tai Nui, daughter of the fire god Krakatau, who fell in love with a commoner named Kala. A 200-foot volcano is the centerpiece of this park which has four distinct themed areas.

Dating isn’t all about chocolates and romance. It’s also important to keep a sense of playfulness and a little competitiveness. And here are a few top picks for fun things for couples to do in Orlando!

If you both love nature and being outside is your idea of fun, plan a day to pursue either of these activities. There are plenty of outdoor activities and parks within the city limits of Orlando. These range from water sports, picnics, amusement parks as well as golf.

Lake Eola is not like the other lake in Florida. It is actually a sinkhole that has been converted into a public park. It is located within city limits and as such swimming is strictly forbidden. However, there are plenty of outdoor activities available to visitors. It is a popular picnic place, and there are paddle boats and swan boats for rent. And by the way….it does not have any alligators1.

There are plenty of lakes in Central Florida, and more than a few within a short ride from Orlando. Explore the lakes of Central Florida with kayak tours. A few of the most popular tours are Merritt Island Refuge Bioluminescence, Wekiwa Springs State Park, Lido Key Mangroves, Crystal River and Kings Bay, and Weeki Wachee Springs State Park. The Merritt Island kayak tour is noteworthy for the bioluminescent display. Central Florida kayaking is also noted for wildlife viewing, which includes birds, alligators, manatees, and turtles.

The Wheel at ICON Park

The giant Ferris wheel at ICON Park is an Orlando landmark that can be seen for miles around. It is also the center of a large amusement park and entertainment center. Besides The Wheel, there are day and night time activities at the ICON Park. It is a hub of lively nightlife.

If the Orlando entertainment scene is too stressful for an entire vacation, you can take a break with a day trip to areas within a half hour to a few hours away from Orlando.

A day at the beach or fishing

Florida is famous for its beaches, and Orlando is a short distance away from Daytona Beach and New Smyrna. Once called “the World’s Most Famous Beach”, almost a century later Daytona has not lost its luster. Its wide beaches were famous for testing and racing cars. Sun, beach and racing enthusiasts enjoy Daytona, which is an hour’s drive from Orlando. Anglers are happy to take the trip to New Smyrna, the “Redfish Capital of the World.” It is less than 80 miles from Orlando.

The Everglades is more than 1.5 million acres of wetlands, marshes, and mangroves. Visitors can take a ride on an airboat with various tour operators. Airboats are heart-pumping flat-bottomed bottoms powered by pusher propellers. The rides are exhilarating which properly accentuates the beauty of the Everglades.

Shop ‘Til You Drop

With more than 75 million visitors a year, it is natural for Orlando to host the best in shopping centers and boutiques. Orlando is a prime shopper’s paradise.

The Mall at Millenia

Shopping centers and malls are meant to impress the shoppers and the Mall at Millenia is just that. It is an impressive structure with more than 150 stores and shops, including 40 exclusive brand name stores. The upscale stores are branches of famous brands like Chanel, Gucci, Louis Vuitton, Saint Laurent, Tiffany & Co. Sephora, Rolex, and Hermes. It also has popular department stores Neiman Marcus, Macy’s and Bloomingdales. The impressive list of stores assures the visitor that they don’t need to go to the European fashion capitals for boutique shopping.

Orlando is justly famous for its shopping with store owned outlet shops. Some of these include Apple, Abercrombie & Fitch, H&M, and Under Armour. Factory stores and other outlet shops offer affordable brand name shopping. Represented in Orlando are outlet stores like Disney’s Character, Polo Ralph Lauren, Crocs, Ted Baker of London, Calvin Klein and others.

Spending an afternoon shopping in Winter Park is one way to de-stress. It has boutique shops with high-quality goods which attract visitors from all over the world. Park Avenue is comparable to Rodeo Drive with a bevy of stores that line the street.

The fun and entertainment do not stop at sundown. Instead, the Orlando nightlife can be a stimulating experience with a wide range of nightspots. There are clubs, elegant restaurants, and a wide choice of evening entertainment.

This is an evening entertainment spot famous for its 1960s ambiance and decor. It also has an occasional burlesque show. It’s not every day that a couple visits Orlando, so why not catch the show.

Enter a castle and arrive in Medieval Times, complete with jousting, swordplay, falconry and horsemanship displays. It also comes with a full multi-course meal sans utensils. Go there for the fun dinner entertainment.

Orlando is a full-course entertainment city and the fun never ends. You can bar hop till you find the perfect spot. Some top bars include ICEBAR, Howl at the Moon, Corona Cigar, The Imperial, The Matador, La Cava del Tequila, Bitters and Brass and a host of others.

Make no mistake! Orlando is a destination for everyone. Indoors, outdoors in the parks or out in nature, there are hundreds of amazing things to do in Orlando Florida for Couples

Orlando is one of the best places on earth to visit any time of year. Walt Disney World, Universal Studios and the other amazing theme parks and attractions make this a magical destination for kids and for kids at heart. A visit to Orlando means childhood dreams come true for millions.